The following post is our first Dining with Dogs post, which we plan to run at least once a month as a regular feature. In each post, we’ll profile a different dog and their eating habits, including nutritional/health challenges and mealtime quirks. We look forward to your comments and feedback. 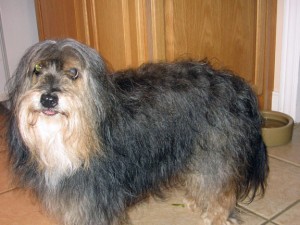 This week we dined with Tally, a gifted 13-year-old Lhasa Apso (Lhasa-Poo cross), who resides in Thornhill, Ontario. This perky pooch’s diet consists almost exclusively of a commercial dry food available in pet stores, selected because it has a lower fat content and produces less “output.” (Truth be told, a product rep from a leading commercial pet food firm recommended it over the “grocery store brand” her firm offered.)

Brian and Donna, Tally’s owners, keep him on dry food to maintain his pearly whites but give into soft food for Christmas dinner, a hamburger at the weekly car show and the odd crumb of cheese.

Last November, a curious pattern began. Tally started leaving his culinary (not territory) mark by ending his meal with half his kibble in a semi-circle. 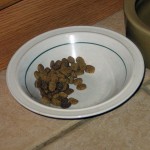 Tally consistently ate only half his bowl - but Carna4 was different.

Up until then, Tally had eaten from a continuously re-filled bowl that was never bare. He’d also developed a preference for soft milk bone treats and had subtly charmed his way up to seven or so a day. One day, he pondered the merits of dry food versus treats and went on a dry food hunger strike. Panic set in and his owners tried in vain to entice him with a range of offerings (in pre Carna4 days).

Finally, with insight from the vet, Donna got wise to his ploy. She put a measured cup of old food in his bowl with stern instructions: You have to eat half your bowl before you get a treat. Tally did exactly that and continues to do six months later.

Upon my arrival, Donna showed me two perfectly halved bowls from a day of two semi rounded meals, topped with two treats. In spite of his full tummy, Tally gingerly selected his first Carna4 bites and ate from the floor but quickly indulged from the bowl. He licked his chops for some time after dinner and miraculously left an empty bowl with no hint of his geometric gift.

Does your dog have a weakness for treats? Have you faced hunger strikes? What did you do to get your dog’s meals back on track? Post a comment to tell us about your dinnertime dilemma or tell us on Facebook or Twitter.