Carna4 is committed to supporting the well-being of pets, their owners and the larger pet advocate community. As such, we plan to profile not-for-profit organizations in the United States and Canada that are focused on helping companion animals or working with them to help others and serve a broader cause. The following is the first of future posts about organizations making a “pawsitive difference.” 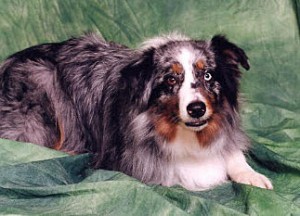 Shasta Daisy was Maxine’s first therapy dog and made more than 650 gentle visits during her “working” life.

The thought of a companion animal cheering up a lonely senior in a long-term care home or hospital bed conjures up heartwarming images. It’s also not a leap to imagine the chaos an over-exuberant large breed could cause in the same settings. How do you avoid this and what do you look for in an ideal therapy dog?

“We look for a mannerly dog, who is calm, friendly but not over trained,” explains Maxine Diedrich, a Team Leader with Therapeutic Paws of Canada, a national non-profit organization that manages volunteer-based therapy dog and cat visitation programs, involving more than 500 dogs annually. “But if they’re too obedient that can take away the spontaneity and outgoing attitude that helps make their visits successful.”

Maxine joined Therapeutic Paws in 2002 when she enrolled Shasta Daisy, an Australian Shepherd Blue Merle, as her first therapy dog. Since then, she has owned three therapy dogs and is currently getting Twyla, her affectionate (but less than brilliant), Shepherd ready for the program.

What keeps Maxine and her dogs involved? “Watching what a dog can do for some of our most vulnerable people,” says Maxine. “From seeing a frail person smile to hearing a person with dementia remember a dog’s name (but few others), the positive effect is overwhelming.”

She well remembers Shasta’s impact on John, a 70-year-old stroke victim who fell into a self-induced coma after losing his spouse and sole caregiver. At first John was unresponsive, while Shasta gingerly visited his bedside for short five to ten minute visits and Maxine spoke softly to him. On the fourth visit, he turned his head to focus on Shasta and his eyes twinkled. He remained engaged and cheered with each visit during his final months. 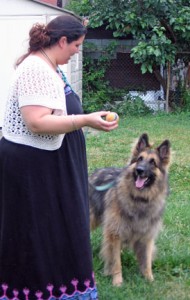 Like most therapy dogs, Hooligan (right) enjoys working but deeply feels some of the residents’ sadness. He relieves this stress at the end of his workday by playing ball with his owner Spring Berriman (left), often on the front lawn of the residence he visits.

Volunteers and their therapy dogs range from teens to seniors like Maxine. Twenty-something Spring Berriman, another Team Leader, squeezes therapy dog work into a packed life, which includes night school, a real estate job and caring for four dogs of her own, plus four cats.

When Hooligan, her Champion Shiloh Shepherd show dog and Canine Good Neighbour recipient was ruled out of breeding (due to EPI), Spring pursued therapy work to put his well-honed people-friendly skills to good use.

“Hooligan specializes in visiting retirement homes, where he spends much of his time in the home’s ‘common area’ so more can enjoy him and his size is less intimidating than in a resident’s room,” explains Spring. “I vividly remember a middle-aged man with MS who formed a strong bond with Hooligan and relished his visits.”

In part two of this story, we’ll outline ideal personality traits of therapy dogs and their owners and the steps to become a “working” dog with Therapeutic Paws, as well as providing links to other therapy pet programs in the United States and Canada. Watch for this post next week.