When Transitioning to Carna4 or Another Healthy Food for Dogs: Take it Slow 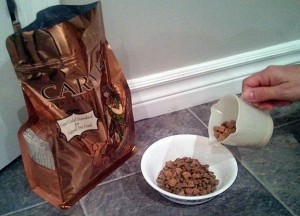 Mix one part of the new healthy food with four parts of your canine's old food.

Transitioning your dog to a new food can be a little tricky. Basically, your dog’s digestion and metabolism are accustomed to whatever you’ve been feeding him or her. Now they’ll have to adjust to a new dog diet, and it’s easier to do gradually than in one shot.

If you’re going from a standard commercial brand to real food, such as Carna4, your dog might detoxify to some degree, whereby his or her body cleanses itself of toxins. (Watch for more on detox and health in a future blogpost.) The cleansing of the colon can cause larger stools. Don’t worry; they’ll return to normal size in time. Water is a crucial to a smooth detox process, so be extra-careful to make sure your pooch has access to lots of clean, fresh water while transitioning.

What can be most challenging is switching your pup from a dehydrated, home-cooked or raw dog food diet to food that’s in a crunchy form. If he hasn’t had it for a long time, he may actually not know how to chew dry food properly. Small dogs especially who try to gobble it down can end up gagging on it and vomiting. So watch those little ones!

For these reasons, when you switch your pooch to a healthy food for dogs, like Carna4, it’s best to do a gradual transition over 7 to10 days. In the case of Carna4, start with one part of this healthy food for dogs to four parts of your canine’s previous food. If you’ve explored www.carna4.com, you probably already know that you should feed your dog a smaller amount of Carna4 than standard dry food —10 to 20 per cent less by volume. With natural ingredients processed using non-nutrient-destroying techniques, it packs much more dog nutrition into each serving, so you can serve less.

Calculate the amount of Carna4 by your dog’s weight using these guidelines and feed him or her a fifth of that, plus four fifths of the previous food, the first day, then gradually change the proportions as you transition.

My own canine companion, Kirby, is young—she’ll turn four this October—and has no apparent health problems, so I transitioned her fairly fast, taking a week. I calculated her Carna4 portion based on her weight, but I’m going to settle on an exact amount by watching her over time, since she’s in a life-phase transition herself, from doggy adolescence to adulthood, and thus getting less active. Also, she’s a Lab cross and Labs tend somewhat to fat. I’ve actually noticed her porking out a bit in the last little while, so I’m going to cut the amount just a bit and see how it goes.

Kirby’s transition was pretty trouble-free and her stools looked fine. She was always perky, but I have noticed she’s somewhat more so, now. She certainly likes Carna4. (So, as a matter of fact, does at least one of my three Siamese cats, as I found signs of attempted feline break and entry into the dog-food container. I have reassured them that Carna4 will be introducing a line of cat food in the future.)

So — transition gradually to Carna4 or another healthy food for dogs and all should go well.

Stay tuned to this blog for more informational treats.